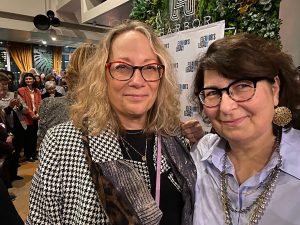 The results of last Tuesday’s elections left me, like many of you, worried and nervous.  We Need a Plan

In the words of former Congressmember Steve Israel, “this was a shellacking on a thumping” for Democrats in New York and nationally.” We lost important local races and we lost critical ballot measures on redistricting and voting rights reform.

One thing is very obvious: our voters did not vote. And theirs did. While there are many opinions as to why, there is one clear antidote to losing: getting our voters to the polls.  If we are to win the upcoming statewide races for Governor, Lieutenant Governor, Attorney General, and Comptroller, we must do a much better job of galvanizing Democratic voters.

What is the role of the New York State Committee in this equation? Many people in the aftermath of Tuesday’s results have complained that the Democratic party was not a more active presence, especially in helping to pass the ballot measures. Yet the State Committee, while a powerful force in certain ways, is not usually an organizing mechanism. This has been proven to us repeatedly in statewide race after statewide race. Governor Cuomo, however, was a very active and interventionist force in local politics and saw himself as embodying the New York Democratic party. Whether the concomitant weakening of the organizing power of the State Committee was intentional or not, is a question that I am sure we all have an opinion about.

So perhaps the better question is: who is the Democratic Party? Our electeds? The members of our Democratic party apparatus? Our activists? Our voters? And if the answer is - all of the above, why do we have such a hard time coordinating, much less strategizing, with each other?

We see that organizations such as the Working Families Party and the DSA are successfully deploying electoral strategies that rely on an effective statewide network of activists. And that some progressive and younger activists are more excited to work for candidates who run on Democratic party lines, but whose primary political affiliation is not Democratic, a reflexive rejection of the Democratic Party as visceral as that of their right-wing counterparts.

Is this simply a power struggle, a matter of nomenclature, an all-or-nothing mentality, or is this a sign that we are not doing enough as a party to identify and support a diverse range of candidates, activists and voters? Is long-term strategic planning as a Democratic party possible in such a volatile and unpredictable period?

I would argue yes, for two reasons. First, because we can: look at the passage of the infrastructure bill that resulted from the negotiations among Congressional Democrats who run the gamut from conservative to moderate to progressive to avowedly socialist. It was something, not what we had wanted, but something. And that negotiating and voting was based on a strategic plan – one that was far different by the end than it had been at the beginning, but still a plan.

Second, because we must. The January 6th assault on the U.S. capitol was, as we all know, carefully planned and executed. It was well-funded and marketed. It was a honeypot for right-wing extremists, pro-Trumpers, and white supremacists, and we are still learning about how far and deep those networks and their funding sources run. Right now, my wife is in trial in Charlottesville against the neo-Nazis and Proud Boys, those “very fine people” in Trump’s words, who assaulted, maimed and killed people in August 2017." White  supremacists brutalized peaceful protestors, UVA students, Jews attending synagogue, African-Americans going about their own business in their streets and homes. And there is a direct line between Charlottesville 2017 and the January 6th attacks. The alt-right has a strategic plan. We need one too.

What role the Democratic State Committee would play in that plan, what each of us and our political affiliations would play, is an open question. But what I do know is that if we don’t do something, we are going to lose to well-funded and well-organized forces of brutality. And what I do know is that we, as Democrats, may be an exceedingly imperfect party, but we are the true party of the people.

Please hold Monday November 15th at 7:00 p.m. for a (virtual) Progressive Caucus meeting.  Call-in details and an agenda will be circulated to you in a separate email. I look forward to hearing from all of you about what seems both necessary and feasible for our plan.

On a related note, the Progressive Caucus will be asking the candidates for statewide office to meet with us in advance of the Convention, probably virtually. This will give us an opportunity to hear directly from the candidates, and also from our colleagues. Given the electoral calendar, we will probably need to hold these meetings in January.

Finally, Jason Clark and Kimberly Davis of the Resolutions Committee have put together an excellent resolution, supporting legislation which would enable gender equality language in New York elections and legal documents – a long overdue step.